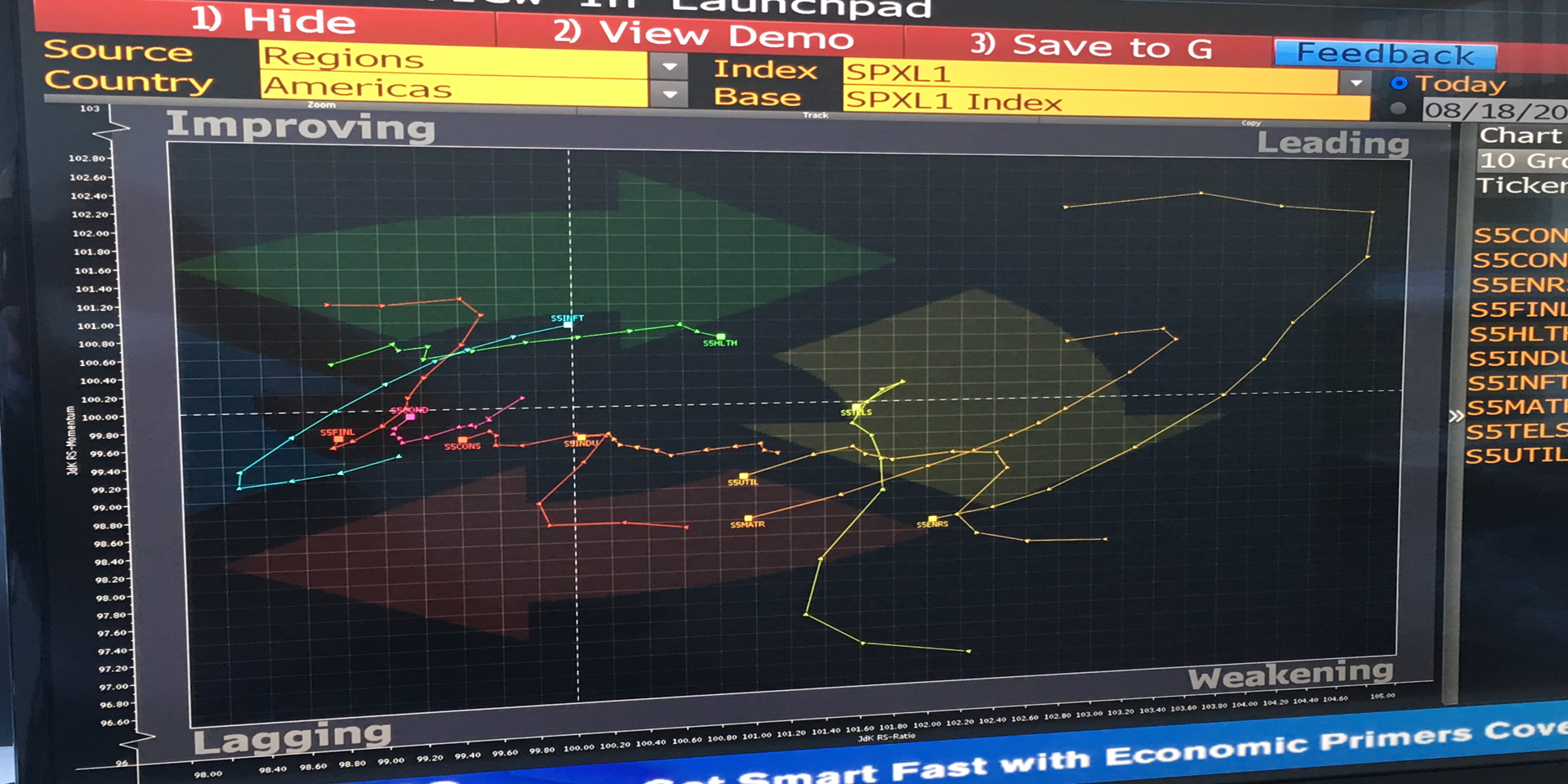 Bloomberg and its Bloomberg professional services terminals are a household name in the financial industry.

The above picture shows a Relative Rotation Graph holding the, at that time still, ten GICS Level-1 sectors that make up the entire S&P 500 index universe.

RRG<GO> on your Bloomberg terminal will initially be populated by equity sectors, depending on the location of your terminal. The screenshot above, for example, is on a terminal which is located in North-America. However, the amber boxes on the top of the screen allow users to easily change the universe and/or the benchmark against which the Relative Rotation will be shown.

There are a number of predefined universes available but users can also choose from a lot of other "sources" and tie the content of an RRG to lists, CIXs, and even portfolios which they have stored on their terminal. Basically, any ticker-symbol available on the terminal can be used on RRG<GO>, including currencies!

The RRG app will allow the users to plot the RRG-Lines, JdK RS-Ratio, and JdK RS-Momentum as indicators on their regular charts. This enables them to relate the rotational picture that they see on RRG<GO> back to regular price/time-based charts and combine this information with other indicators or techniques which they may be using in their regular workflow. It facilitates embedding RRG information into a users regular workflow and make it part of the investment / decision process.

The RRG Custom Studies APP also includes access to two color-bar studies, RRG-Quadrant bars and RRG-Trend bars that users can overlay on their own charts.

RRG-Quadrant bars will color the bars or candles of your price chart according to the quadrant in which the security is moving on the RRG with the appropriate benchmark. Green for leading, Orange for weakening, Red for lagging and Blue for improving.

RRG-Trend bars will use the same color scheme to paint the bars on the price chart but applies a filter that attempts to maintain a Green or  Red color for very strong trends (up or down) which cause a rotation to take place completely on the right- or left-hand side of the graph.

On your Bloomberg terminal hit {APPS CS:RRG<GO>} for a FREE trial