What Can We Learn From Equal Weight vs. Cap Weighted Rotations on RRG? 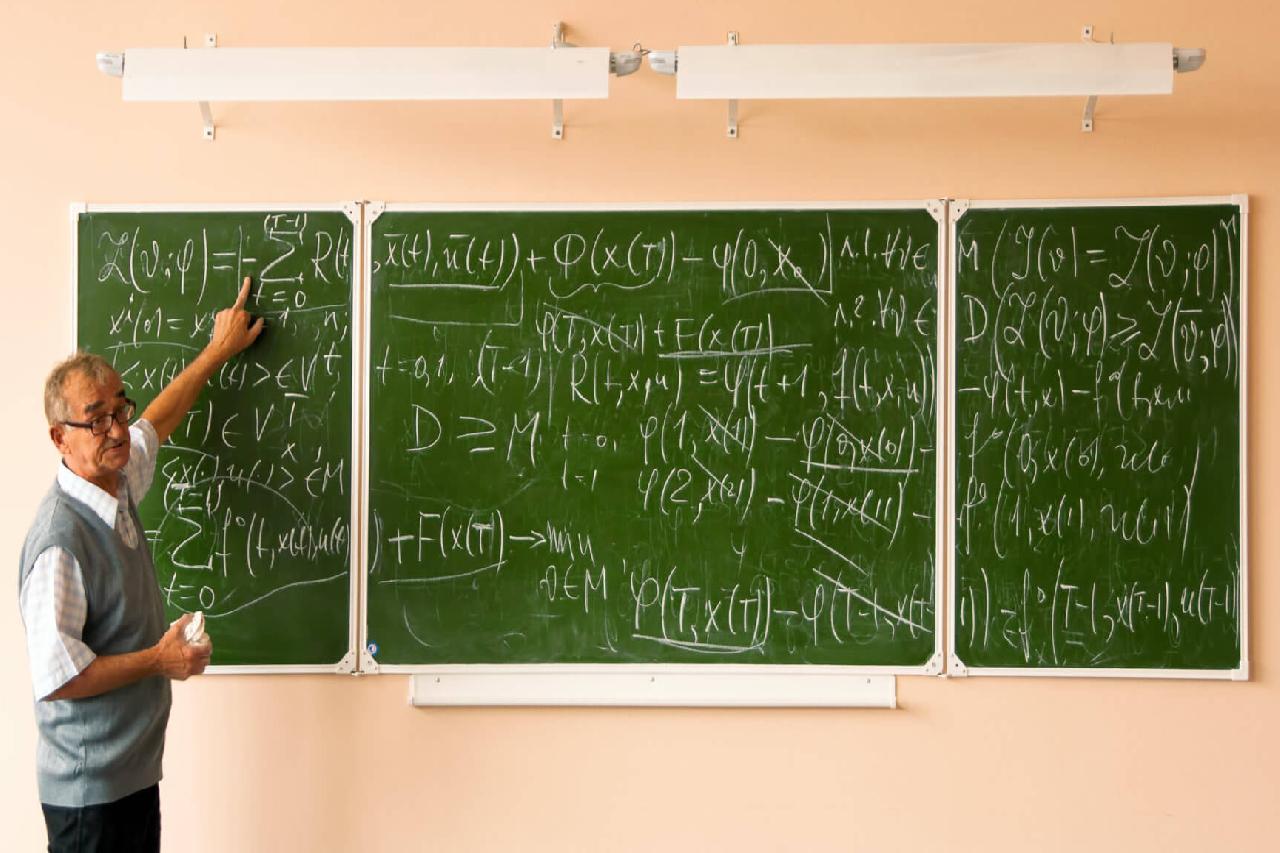 By far the most-watched Relative Rotation Graph is the one that shows the rotation for the 11 S&P sectors, and for good reason; it shows very clearly where the strengths and weaknesses in the various areas of the market are.

But we have to realize that some of these sectors are dominated by one or a few mega-cap stocks, which can distort the underlying picture. The best known, of course, are AAPL and MSFT in Technology, AMZN in Consumer Discretionary and FB and GOOG in Communication Services. 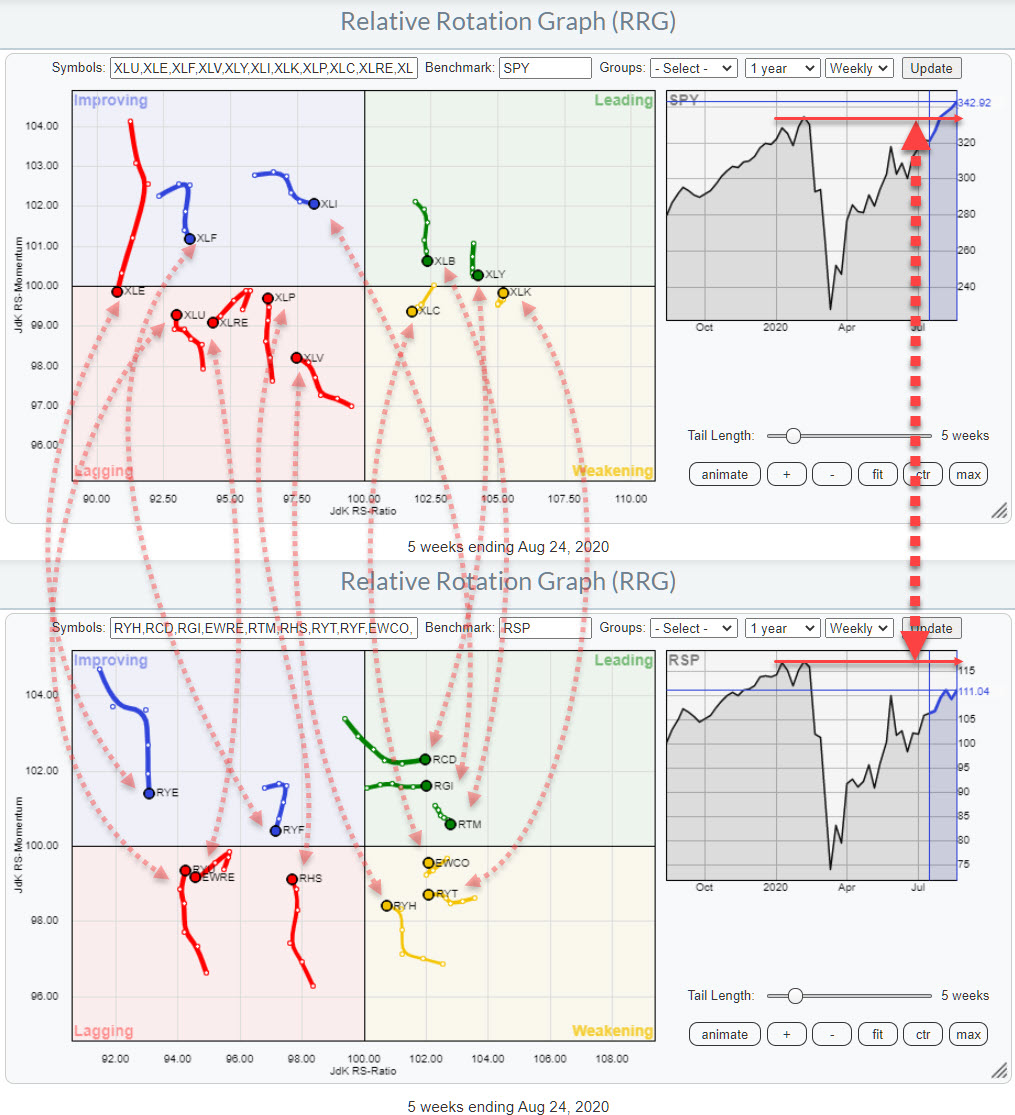 I have tried to connect Equal- and Cap-weighted sectors with each other using dotted and shaded curves as much as I could without hurting the image too much. Though you'll probably need a desktop screen to get both images in full view to see all the connections.

Let's start with the first observation regarding both benchmarks. SPY, as we all know, has broken above its early 2020 peak and is now pushing further to new all-time highs. RSP, the Equal Weight counterpart, is not there yet. This is the first indication that mega-cap stocks have pushed SPY above its resistance - though there is a large group of stocks that are not there yet, in many cases not even close.

Moving to the sectors, let's see where we can see similar or different rotations on these RRGs and figure out if they can give us some additional information.

IMHO these rotational patterns are very similar and both are telling us that Energy is one of the weakest, if not THE weakest, sector in the S&P at the moment. The negative RRG-Heading suggests that more weakness lies ahead.

XLU is moving slowly higher on the JdK RS-Momentum scale, but is not gaining on the JdK RS-Ratio scale while still far to the left of the plot. RYU is on a similar path, so both versions are sending the same message.

Both XLRE and EWRE are showing a similar "hook" back to the left and a negative RRG-Heading after a short period of improvement. This indicates that a further underperformance for Real Estate stocks is likely in the coming weeks.

The Healthcare sector with cap-weighted XLV and equal-weighted RYH is the first sector that is showing tails in different quadrants; XLV is inside lagging while RYH is still inside weakening. The shape of the tail, on the other hand, is largely similar for both ETFs.

A look at the price charts of both ETFs, with relative strength versus their respective benchmarks, shows a sector that has broken to new highs (positive) but with relative strength failing to catch up. The big difference is that the relative weakness for XLV is much better visible than for RYH. All in all, the outlook for this sector is not strong, the rotational trajectory is heading further left (which indicates a further loss of relative strength) while the recent up-tick in relative momentum already seems to start fading.

XLI is inside the improving quadrant and just started to move higher again on the RS-Ratio scale after a few weeks showing a loss of momentum. RGI is solidly inside the leading quadrant and moving at an RRG-Heading around 90 degrees. This means a steady further improvement of relative strength vs. the benchmark but without acceleration/momentum. In other words, a steady relative uptrend.

With the equal-weight ETF leading the cap-weight ETF in terms of relative strength, this suggests that the strength for the Industrials sector is coming from a broad(er) base, which IMHO makes it a reliable move.

This is the first sector where the RRG-Heading on the tails starts to diverge. Both ETFs are inside the weakening quadrant after a rotation through leading. EWCO has just started to curl up again, moving back up towards leading while XLC continues at a negative RRG-Heading.

A quick look at mega-caps FB and GOOG shows that their relative strength has been flat (at best) lately, which means that the improvement for EWCO is coming from the second-tier names in this sector. That is a sign of strength for the second tier stocks, especially as they are apparently so strong that they can overcome the relative weakness of GOOG and FB, which is putting pressure on the rotation of XLC.

When FB and/or GOOG can pick up some relative strength again, that would mean a serious boost for the Communications sector.

LIN is the biggest stock in this sector at 18%. 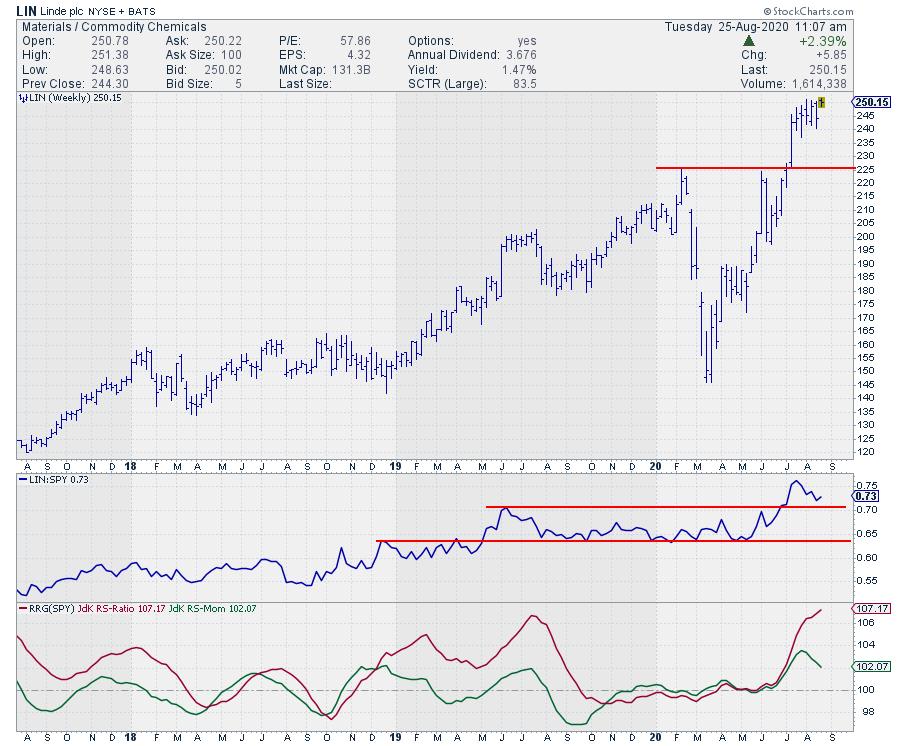 Looking at the start, we can see why XLB is losing relative momentum at a faster pace than RTM. After the combined break in price and relative strength, price stalled and started to move sideways, which caused relative strength to come off.

The good news is that, on both charts, LIN is holding up well above the breakout levels, which makes this an interesting candidate to pick up once LIN drops back towards the old resistance level, now support, on the price chart. Ideally, that's somewhere in the $230-$235 range.

Once that happens and relative strength can pick up again, the Materials sector can continue to play a leading role inside the S&P 500.

As a matter of fact, measured on the RS-Ratio scale, RTM is already the strongest sector in the S&P 500.

XLY and RCD are both inside the leading quadrant, but XLY is moving straight lower on the RS-Momentum scale without losing much relative strength, while RCD came into the leading quadrant at an RRG-Heading between 90-180 degrees. RCD then stabilized and is now moving due East. This means a stable relative uptrend without acceleration nor deceleration.

Clearly, the Elephant in the Room here, literally, is AMZN. The chart continues to amaze people and, despite a small pause recently, it looks as if it is only taking a breather before moving further.

Sometimes trends need a bit of rest, you know; otherwise they would bend over backwards like a wave in the sea... 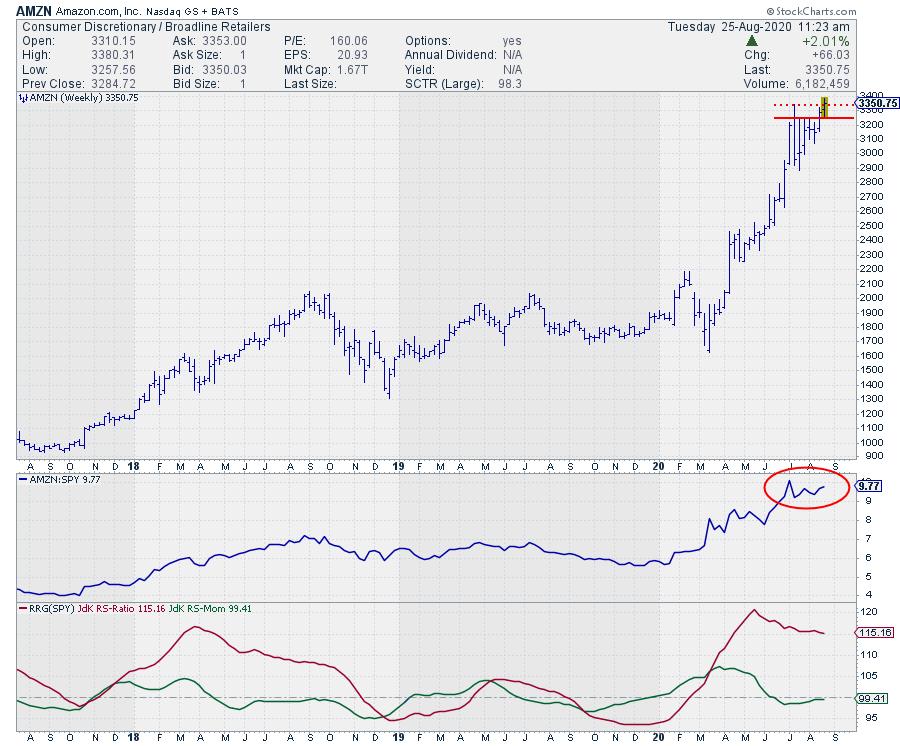 The pause in the rally has caused the RS-line to move sideways as well and, obviously, with such a high weight in the sector, that puts pressure on the relative strength for the sector as a whole.

The second largest stock in the Consumer Discretionary sector is HD. 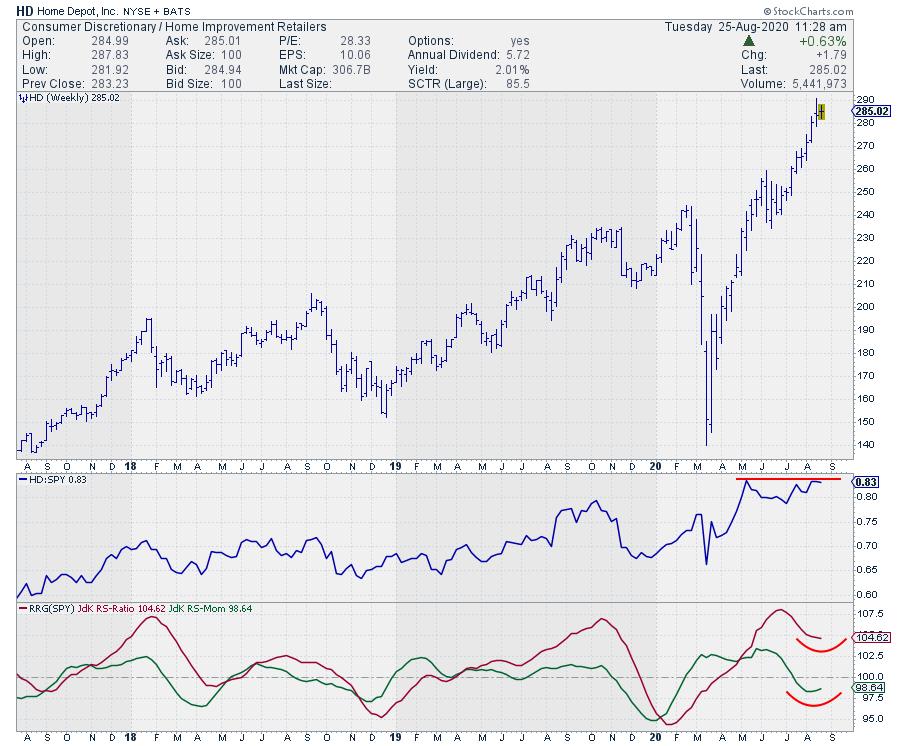 Here, we also see a flat RS-Line since the peak in RS on 11 March, which also pressures the relative strength for the sector as a whole. The pressure from these two big names is not present in RCD, which is still moving higher on the RS-Ratio scale without a loss of relative momentum.

With both AMZN and HD still in strong trends, a break above their respective peaks in relative strength will be the sign for a continuation of the outperformance for XLY.

While XLK is still the highest-ranked sector in the cap-weighted universe and the tail just rotated back into a 0-90 heading after dipping into the weakening quadrant, that cannot be said of its equal-weight counterpart RYT. RYT is also inside the weakening quadrant, but moving due West, which is almost opposite of XLK. The clear culprit for this disconnect between XLK and RYT is AAPL.

In the EW universe, RYT lost its top ranking a few weeks ago and, with RYT moving West and sectors like RCD, RGI and RTM moving East, it seems only a matter of time before Tech will be the fourth- or fifth-strongest sector. The good news is that RYT is still above 100 on the RS-Ratio scale and still has room to complete a rotation back up to leading while inside the weakening quadrant. 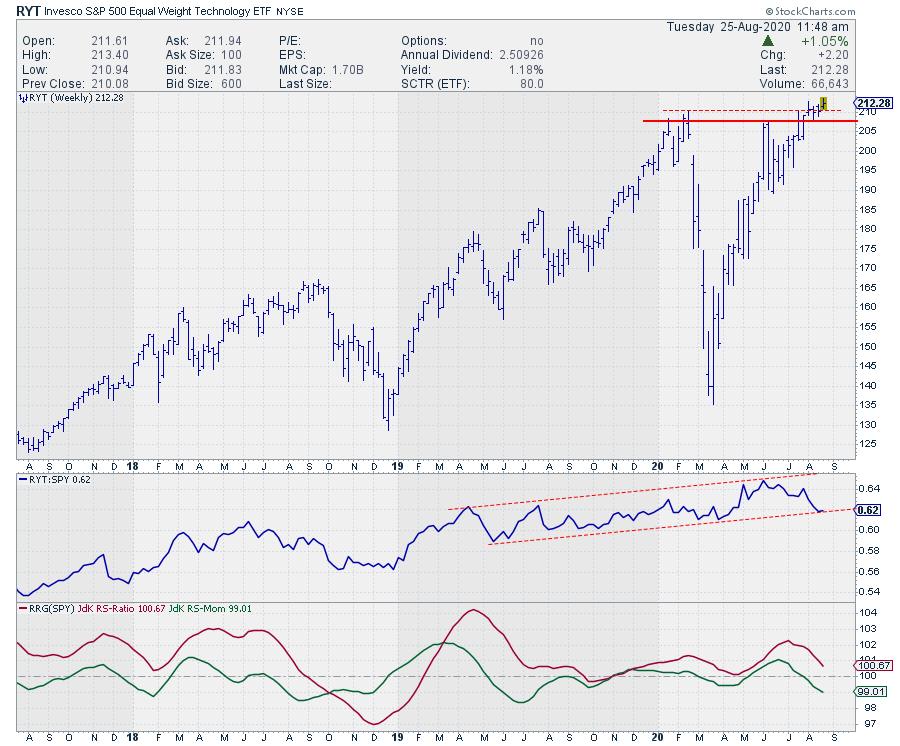 In order for this to happen, the recent break above resistance should now start to accelerate, which, in its turn, would give a boost to the RS-Line, currently at the lower boundary of its rising channel. A combined pick up in momentum for price and RS will put RYT back on track as one of the stronger sectors.

So the risk is clearly in AAPL. As long as AAPL continues its climb, XLK will continue to do well, but that does not necessarily go for RYT. But this also goes the other way; if AAPL starts to decline, that does not have as big an effect on RYT. This knowledge can help you in portfolio construction when you trade these ETFs.

The trend in Technology is still up, both in terms of price and relative strength. And the only thing we can do is monitor these trends closely and try to pick up any downturn as early as possible.

But in terms of risk management, AAPL is becoming a real issue inside XLK. If it goes for whatever reason and it goes fast, then most people will be too late to respond. If you swap XLK for RYT, you will still have the desired allocation to the tech sector and still hold a portion of AAPL. But the impact of any decline in AAPL will not hurt as much as it will hurt while holding XLK.