How to Out-Perform the S&P Great Bull Run

The US stock market has made a historic move by reaching 2,000 in the S&P. So far, there is no sign it will top out here, despite round number resistance. But can we do even better? Is there another stock index which is likely to outstrip it in the near future? Can we out-perform the out performer?

To be able to analyse other important global indices and to see potential opportunities let's look at an RRGTM with the S&P500 as our benchmark - in the 'cross-hair' of the chart. 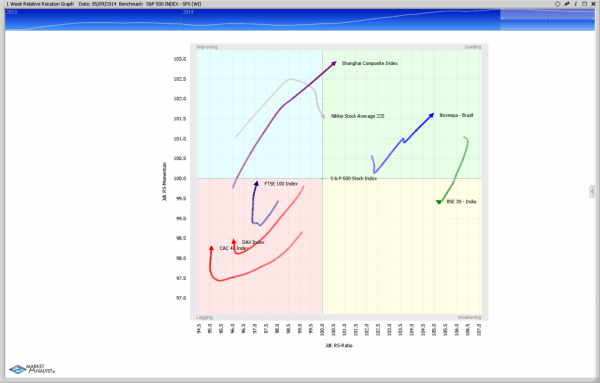 Weekly Global Indices versus the S&P500

We are interested in the Indices on the right of 100. These are the ones which are in an up trend on a relative basis compared to the S&P 500 itself. This is of course in a very strong up trend in absolute terms too. The indices in the top right quadrant, the Leading Quadrant are in a relative up trend with good momentum. So there we have the Nikkei and Shanghai Composite just moving in to the Leading Quadrant. The Bovista is well established in it and moving away from the cross-hair -the S&P500. The Indian BSE 30 has just moved across to the Weakening Quadrant.

There are many indices which are struggling to keep uo with the US; particularly in Europe. But lets study over-performance opportunities. First Brazil's Bovista. 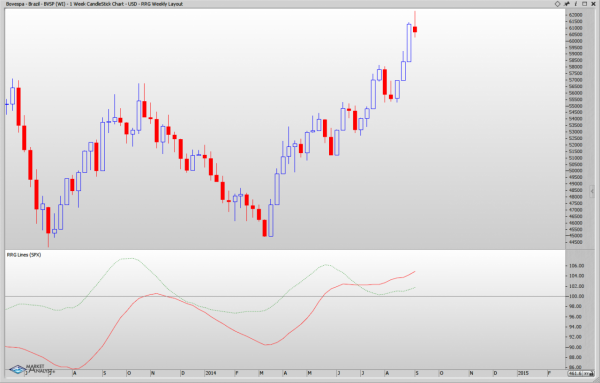 The BVSP is moving very strongly up. The JdK RS-RatioTM and JdK RS-MomentumTM are both above zero and pointing higher. This is what has put it in the Leading Quadrant and made it move away from the cross-hair. It is in an up trend in relative terms and has good relative momentum. It has arrived as an over-performer. It looks set to remain an out performer.

How to catch the swing into over-performance?

While BVSP is undeniably strong on a relative basis and getting stronger, where can we find an index which is moving up the list rather than already at the top? We can see in the RRGTM that the Shanghai Composite has just moved from the Improving to the Leading Quadrant. It is doing so at a very nice angle. 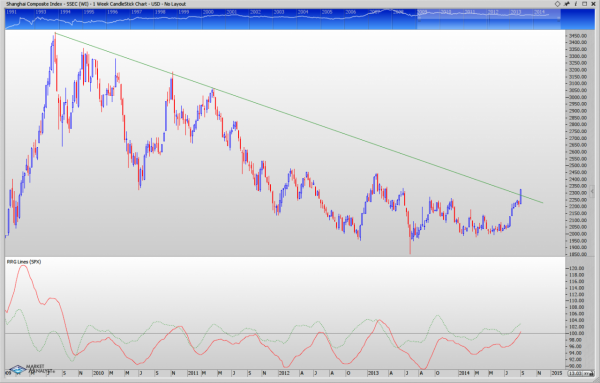 The chart above show the Shanghai Composite from 2009 and its long down trend. Whichever way you draw the down trend line, it has been broken. This is a major change in this index. We picked this up early as it move through the RRGTM Improving Quadrant and it has now made it to the Leading Quadrant. See how the JdeK-RatioTM and JdeK-MomentumTM lines are both now above zero and heading up. We noted the nice angle of the Shanghai Composite in the RRGTM plot. It is moving into the Leading quadrant but is also away from the cross-hair - the S&P Index.  Things that are close to the cross-hair, no matter which quadrant they are in and showing high correlation with the benchmark index. The Shanghai Composite is in a very nice place technically.

Stocks are generally in a world-wide bull trend. It feels like the lead is coming from the US. But there are some big indices offering more opportunity. The Bovista Index is outstripping the S&P500 Index in both relative trend and momentum. But the most technically interesting is the Shanghai Composite which is breaking a long term down trend on an absolute basis and looks set to outstrip the S&P performance in the coming weeks and months. If you are not it it, your should get in now.

Trevor Neil is co-owner of RRG Ltd. together with Julius de Kempenaer. Trevor will publish his findings in the RRG-free and RRG-pro blogs on this site.

If yu have any specific subjects that you would like to see covered by Trevor, at least loosely related to RRG and/or relative strength, please post a message in the forum or send him a message directly.